This week all of my classes (and Coding Club) dropped everything and participated in the Hour of Code, a worldwide event coinciding with Computer Science Education Week. The purpose of this global movement is to bring awareness to computer science and get as many people as possible all over the world to try at least one hour of programming, with a goal to prove that anyone can code, and to inspire people to take up coding.

I am thankful to be back in the classroom this year in a technology educator role, and for our district’s new course and curriculum that I teach called Digital Learning. Though our focus is on digital citizenship, protecting our privacy online, and trends in technology, I have the ability to squeeze in programming as part of the course’s focus on developing 21st Century skills, because coding absolutely is our future and a relevant real world skill for students. If my students today learned how to code, imagine where they’ll be and what they’ll be doing in 10 years? We just finished discussing the rise of technology in our everyday lives and predicting what the future of technology will look like, and guess what? The amount that we rely on technology isn’t going anywhere but up. Those who know how to program and create the technology are the ones who will program and control the future. Let’s give them a head start, shall we? 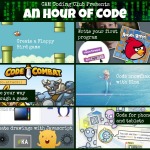 Though I infuse a little coding already in my Digital Learning course, the kids really appreciated the opportunity to drop everything (we’re mid-way through a final project for the quarter!) and code this week. Even my Digital Video Production students stopped working on their final film projects to code on Tuesday.  I wish DEAC (Drop Everything and Code) sounded as good as DEAR (Drop Everything and Read)… but alas, I think I need a better acronym.

So what did we do? Well, Code.org put together a fantastic website with a handful of simple (and fun!) coding tutorials meant to take approximately one hour to complete. I turned some of those tutorials into a ThingLink (see previous post on how I can’t stop using this tool) and then posted the ThingLink to our classroom Edmodo wall for students to access. The ThingLink let students visually decide what they wanted to make, and then took them through to Code.org’s tutorials to get started with a single click. It embedded beautifully into Edmodo. 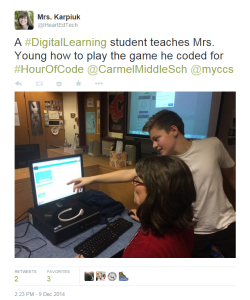 A lot of students chose to make their own Flappy Bird game. They loved when they figured out how to control the difficulty level of their game based on the variables they modified, and how the blocks of code worked together. Everyone made something unique. Lots of students wanted to share their Flappy Bird games, and I was easily able to share the URLs back to Edmodo so that the whole class could then check out each other’s games and try them. It was awesome. Every single student was engaged. Every single student coded. We even had one of our assistant principals stop by, and a student eagerly explained to her how to play the game he had just made.

After school, Coding Club sponsored an Hour of Code event. They brought newcomers – friends – to the club and helped them complete a one hour coding tutorial. We even had parents show up! I loved seeing students get up and share their creations, or go over to help a peer figure out the error in their Javascript that was preventing their CodeCombat character from escaping the dungeon. The Hour of Code was a win-win for everyone.

The best part for me was reading the student reflections on Edmodo after they had participated in an hour of programming; most who were coding for the first time ever. The overall sentiment was that coding was really fun and easier than they thought it would be. Several mentioned they couldn’t wait to do more when they got home. Hooray! Here are just a few of the many tweets I shared out of the students’ reflections: