ThingLink has EXPLODED in my Classroom!

I’ve really taken to ThingLink this school year in my classroom. I had tried it before, but I really found value in using ThingLink now that I’m back with students as a way to provide them a lot of independence to explore some hand-picked resources. I’d create the images and link up starter resources and tools to send students in the right direction to get them asking even more questions.

Last quarter I set up a ThingLink to share with my Digital Learning students a recent news story involving a copyright dispute over some monkey selfies. (You can see how this topic really hit home with kids and piqued their interest!) On my Monkey Selfie ThingLink I included several news articles from different points of view so that students could get a broad understanding of the argument. I also included a variety of media – articles, video, pictures, and a poll, so that students were truly interacting with the ThingLink as they explored both sides of the story. Students then worked in groups to decide which side they were on, and it got pretty heated! They loved the ThingLink interface for introducing and working through the lesson because it was visually appealing and gave them some independence: 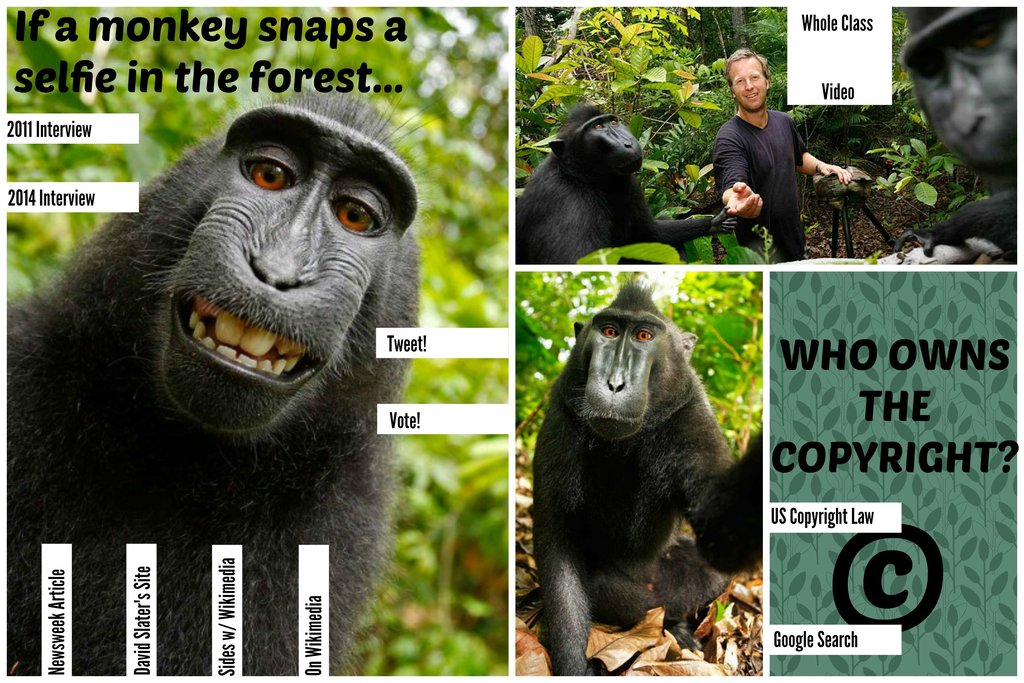 I’ve continued to use ThingLink when appropriate for other projects because it went so well with the monkey selfie lesson. About a week later I used it again in my Digital Learning classes to introduce students to a few areas of technology trends. This time, students were in groups and each group worked on a quadrant of my ThingLink image to learn more about their trend and become experts on that one trend. Then they switched up their group structure to create what I call “super groups” where we had one person from each of the quadrants together in a group now, and they took turns teaching each other about their trend. The kids then loved going off and exploring all of the various trends on their own and were motivated to learn more because of the visually appealing and fun way that the ThingLink presented the material. Kids were really engaged!

ThingLink was a hit so far, and so I used it again in Digital Learning to introduce students to the history of the cell phone. I gave them a video and article with photos to get them started and to show them some examples of old cell phones and how they’ve changed over time, and then I was able to set up links to the most recent version of Apple, Windows, and Samsung (Android) phones so that they could compare the history of the cell phone that they had explored visually with the specs of the latest and greatest. Because I can modify my ThingLink hot spots, as technology evolves, I can update those links to keep them current too, so my ThingLink will always be relevant! One awesome observation my students made when we shared out later was that cell phones started out large and then over time got smaller and smaller, but then recently they seem to be getting bigger again… and I realized that I hadn’t noticed that myself, but they were right! And of course the students predicted that the reason for this trend had to do with the type of media that  Interesting…

I enjoyed ThingLink so much that when I started an after school Coding Club at our school this quarter, I used ThingLink to give students some starting points for tool options and websites they may want to explore while in the club. After polling students using a Google Form to find out where their interests were, I broke up my ThingLink into three major areas: game design, animation, and programming languages. Then I provided several tools and sites that they could use to explore this area further, and kids picked one from there. This method allowed students to independently explore their areas of interest and pick something that they wanted to use to get started. Students also had the option to suggest other tools, but for a big chunk of students who were beginners to coding, this provided a great starting point to let them see what was even out there.

To make my ThingLink images, I used a free site called PicMonkey.com. I always chose to make a collage, and fill the collage spaces with images, thinking of how to position them considering what hot spots I planned to add later. I could also add text to the collage image. I picked images from a royalty-free site called Pixabay.com, or used screenshots that I took of my own screen. (Or in the case of the monkey selfie issue, the debate is still up in the air if the images of the monkey are protected by copyright or not! Ha!)

ThingLink has been a really great addition to my tech toolbox. The best part was creating accounts for students (or a student group) for their Digital Learning projects at the end of the quarter. Some groups chose to use ThingLink to present their information and compile all of the Google Docs and presentations that they had created in one spot. I think for next quarter I’d like more kids to use ThingLink tools. Give it a try!