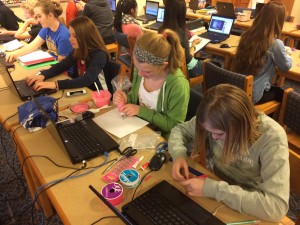 For the next two weeks, my Digital Video Production (DVP) students and I are “misplaced” due to ISTEP. Almost all computers in the school are designated for ISTEP testing, including our DVP lab. We are incredibly thankful to have internet and a set of laptops in our temporary location, but the lack of space and access to our usual software and equipment for video production has made work on typical projects a challenge.

At first I toyed with the idea of switching things up and having kids BYOD and use their devices to film stop motion now instead of later. This would be an easy change. But I was inspired last quarter by a Genius Hour project that a fellow teacher and our school’s media specialist worked on together, and decided to do a modified version over the next two weeks.

Genius Hour is inspired by the concept of 20% time at Google and a best-selling book by Daniel Pink called Drive. Google allows their engineers 20% of their time “on the clock” working to pursue their own personal passions. As Daniel Pink describes it, Genius Hour gives employees one hour a week to work on new ideas or learn a new skill. Both origins describe increased productivity all around, and this concept has been a hot trend in education lately, too. 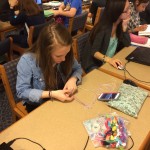 The important part of Genius Hour or 20-time is that students be allowed to pursue their own personal passions. As a teacher, I shouldn’t give them topic parameters. (i.e. I wouldn’t dictate that it must be about digital learning or video production.) The only parameters I give involve personal safety and appropriateness for school. I have a student who wants to learn how to make a fire tornado, and obviously fire isn’t going to work in our classroom. So as long as their passion is something that they can learn, teach themselves, and practice in the confines of our classroom appropriately, then it’s a go. At least, that’s how I addressed it yesterday when I introduced the concept.

I gave students examples: I learned how to crochet by watching videos online. Anytime I need to figure out a new knit or crochet stitch, I hit up YouTube to see how to do it, and I follow right along with my crochet hook or knitting needles. I asked students to think about what they’re passionate about, and use this time to teach themselves something new about a topic of their choosing.

I know it’s not exactly Genius Hour or 20-time because we’re doing this for 50 mins every day for the next week or so vs. one hour a week, but the fundamental importance of allowing and encouraging student choice is still there. You should’ve seen the kids light up at the freedom to choose what they were going to learn about. It’s also fun for me to see what kinds of things my students are interested in outside of class.

So what are my students doing? 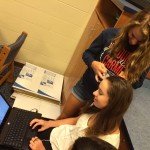 This little room is ELECTRIC during DVP this week. Yesterday I introduced the concept and gave them some time to brainstorm and explore different topic ideas and think about what they wanted to pursue. Today kids started bringing in their supplies. Every student is sitting in front of a laptop or their personal device watching or reading a tutorial made by someone else to learn the new skills themselves. One student, who is building a computer from scratch, said that he was planning to purchase the parts and build a computer in his personal time at home already, so this was perfect timing. He was pricing the parts he needed today. Another student, who is teaching herself cake decorating, brought in a decorator’s icing bag, decorator tips, and a container of frosting. While watching technique videos on YouTube, she attempted to replicate the icing roses and designs on a sheet of paper in front of her. Three students are learning how to make friendship bracelets out of colorful floss, following both online videos and books. The best part is that they’re all doing different styles of braiding and weaving, yet are helping each other.

Since these are my DVP students it shouldn’t be too surprising that video production is going to come into play somewhere. I told students to spend this week and a little of next week learning their new skill and practicing it in class, paying special attention to what it looks like when they break it down into the basic steps in a process. Next week they’ll put together a shot list and script so that they can now teach and demonstrate their new skill to others on camera. Then we’ll share. Our goal is to have acquired a new skill and know it well enough to teach it to others AND meld that all together with video production knowledge to produce a video tutorial of their own. The padawan will become the master. They’ll have to consider angles and shot composition, as well as demonstrate good audio and lighting technique to make their video clear and easy to understand. By the time they have learned their new skill and planned the video production part of teaching it to others on film, we’ll be back in our normal classroom with access to our cameras, tripods, space for filming, and the video editing software we use to pull it all together. Students will then spend a few days filming and in post production to complete their projects.

For more information about what Genius Hour is, check out GeniusHour.com – it’s full of ideas! I had students complete a contract to tell me what topic they chose (so that I could approve it for appropriateness, etc.) and explained that if they can learn it in one class period and/or a quick Google search that it’s probably not a good project idea. I also had students cite at least three different sources that they used to teach them their new skill. 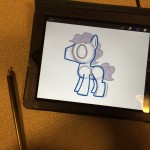 I am doing Genius Hour right along with my students to model the process I’m going through. I’m learning to draw things, too! Walking around and checking in with students is a lot of fun, because they show me how far they’ve come and what they still need to master or do next, and they also want to see how my project is coming along. It really feels like we’re doing this together, which is awesome.

So awesome that I’ll be doing this with every DVP class every quarter going forward. It’s such an authentic experience and they’re applying their DVP techniques in a meaningful way, too, to show me what they’ve learned about making a good film. Thanks, ISTEP!